What is an arena allocator?

An arena allocator is a mechanism for allocating memory as successive chunks from one or more segments owned by the allocator. In particular, it is useful when allocating lots of array-like blocks during batch processing, and at the end of the batch nothing survives:

For the purposes of this API, I’m talking about arena allocators specifically in the context of allocating array-like structures (think T[], ArrayPool<T>, etc).

You can think of it as “stadium seating”:

The last point sounds like an inconvenience, but if you’re touching “pipelines”, you’re probably already familiar with ReadOnlySequence<T>, which is exactly this scenario, expressed in read-only terms; so we can use this familiar concept, but in a read/write model.

To help solve this, we add Arena<T>, an arena allocator for blocks of memory of type T - broadly comparable to T[]/ArraySegment<T>/Memory<T>. In many cases, however, we might have multiple types involved in a batch; to help with this, the non-generic Arena extends this further by providing efficient access to multiple types.

Usage of Arena<T> is simple:

In the above, block and anotherBlock are Sequence<SomeType> values; these are the write-friendly cousins of ReadOnlySequence<SomeType> with all the features you’d expect - .Length, .Slice(...), access to the internal data, etc. Importantly, an Sequence<T> is a readonly struct value-type (meaning: zero allocations). As with ReadOnlySequence<T>, using them is complicated slightly by the fact that it may (sometimes) involve non-contiguous memory, so just like with ReadOnlySequence<T>, typically you’d want to check .IsSingleSegment and access .FirstSpan (Span<T>) or .FirstSegment (Memory<T>) for an optimized simple fast path, falling back to multi-segment processing otherwise.

If we want to use Arena to allocate sequences of multiple types:

Note that we now use the generic Allocate<T> method, supplying the target type at the call-site. The returned sequence types remain the same, but internally the arena can optimize memory usage by allocating all types that satisfy T : unmanaged (i.e. struct types that don’t include any reference-type fields) by allocating them all from the same raw memory.

How to work with the values in a sequence

Sequence<T> works very similarly to ReadOnlySequence<T>, with some tweaks. Firstly, unlike ReadOnlySequence<T>, Sequence<T> exposes an indexer; this indexer is of type ref T, so you aren’t copying the value - you’re accessing it in situ (unless you choose to de-reference it). You can also assign directly to the reference, or mutate the value via the reference. If the mention of ref T references sounds scary: it really isn’t; ultimately this is identical to what the array (T[]) and span (Span<T>) indexers already return; in most cases you simply don’t need to stress about it.

You can also iterate over the individual segments (Memory<T>) if needed, or the segments as spans (Span<T>)

Note that because the segments and spans here are writable rather than read-only, assigning values is as simple as writing to the span indexers.

Alternatively, you iterate over the values:

and if you’re using C# 8.0 or above, you can iterate over the items as references - avoiding a stack copy:

And just like with the indexer, the foreach (ref T value in block) syntax allows you to assign to the l-value (value), or mutate the value via the reference. This usage is particularly useful when T is a large struct, as it avoids copying non-trivial types on the stack. It also works particularly well when passing the values to methods that take in T or ref T parameters.

The most common pattern - and the most efficient - is to iterate over a span via the indexer, so a very common usage might be:

Or we could write it more conviently (but less efficiently) as:

However, we can also make use of the value iterator directly in some interesing ways - more than just foreach. In particular:

We can migrate this conveniently to:

(of course we could also choose to check values.IsSingleSegment and optimize for the single-segment variant, which is usually very common, but … we don’t have to).

Because the Sequence<T> concept is so close to ReadOnlySequence<T>, you may want to get the read-only version of the memory; fortunatly, this is simple:

(or via the implicit conversion operator)

You can even convert back again - but only from sequences that were obtained from an Sequence<T> in the first place:

(or via the explicit conversion operator, which will throw for invalid sequences)

A common pattern in data parsing is the DOM, and in a low-allocation parser you might want to create a struct-based DOM, i.e.

The above is trivially possible with arrays (T[]), but the above declaration is actually invalid; the CLR assumes that Sequence<T> could feasibly contain a field of type T (now, or in the future), and if it did, a struct would indirectly contain itself. This makes it impossible to determine the size of the struct, and the CLR refuses to accept the type. It works with naked arrays because the runtime knows that an array is a regular reference, but the above would also fail for Memory<Node>, ReadOnlySequence<Node>, ArraySegment<Node> etc.

Because this type of scenario is desirable, we add an additional concept to help us with this use-case: untyped allocations. Actually, they aren’t really untyped - it is all just a trick to make the runtime happy, but - the following works perfectly and remains zero-allocation:

Sometimes, again when dealing with large struct T, it would be nice if we could embed a value without paying the cost of embedding a large field into another type, or dealing with lots of stack copies. In the scope of a local method, we can do this using “ref locals”, i.e.

Unfortunately, ref fields are not permitted, even in ref struct types. As a compromise, arenas provides a similar concept to a ref field: a flyweight, specifically via Reference<T>. Again, this is another value type, so there is no allocation cost - and a Reference<T> value knows where to look for the actual value inside the arena.

By using ref return, the flyweight - which itself is suitably small - can be used as a field to provide access to a reference:

From here, myRef.Value is a reference to the data in the arena, so it can be read, written, passed as a reference, etc very cheaply. There is also an implicit conversion operator from Reference<T> to T.

A number of configuration options are provided in the Arena<T> constructor:

Performance is shown in the image below; a short summary would be: 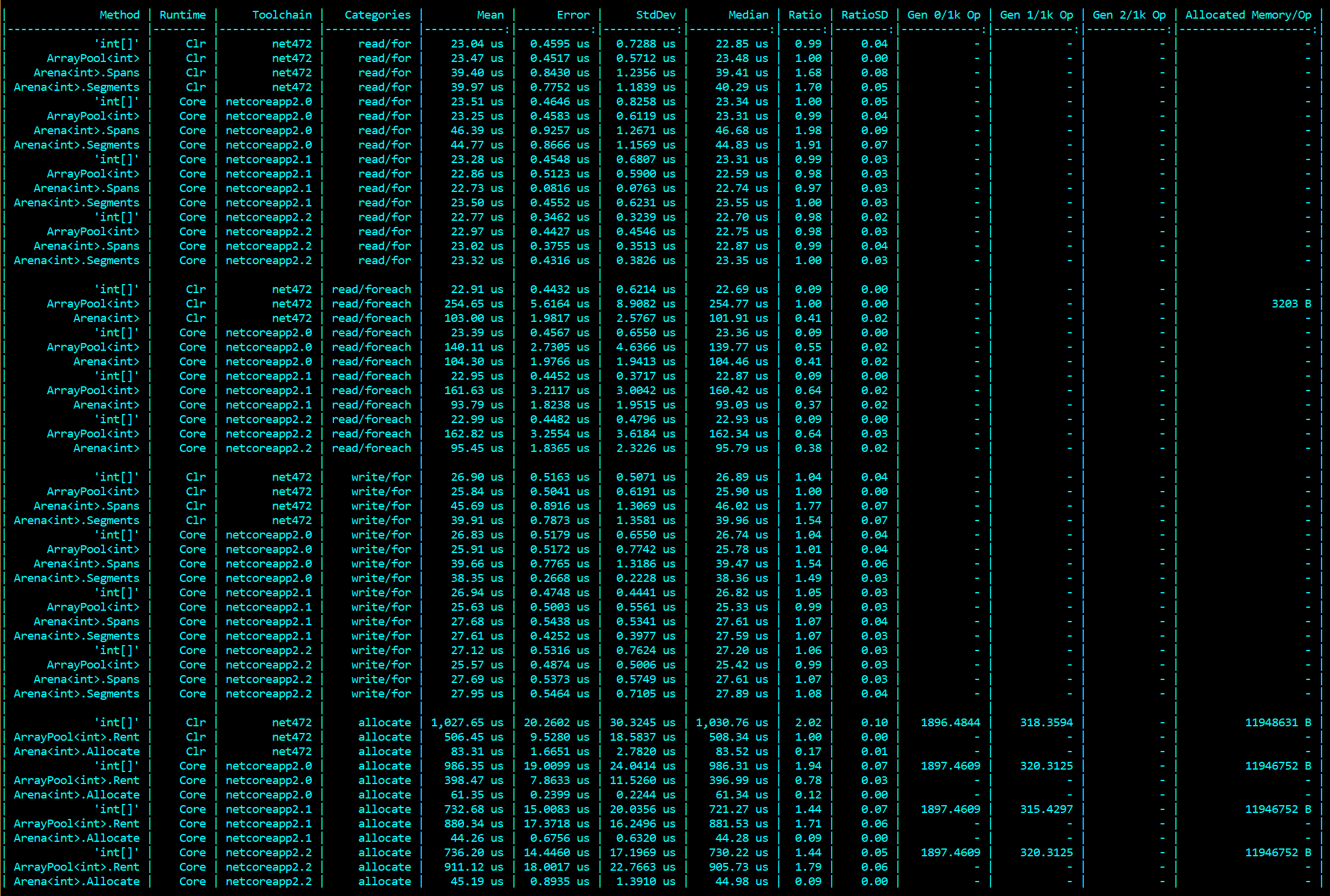 An Arena<T> is not thread-safe; normally, it is assumed that an individual batch will only be processed by a single thread, so we don’t attempt to make it thread-safe. If you have a batch-processing scenario where you can process the data in parallel: that’s fine, but you will need to add some kind of synchrnoization (usually via lock) around the calls to Allocate() and Reset(). Note that two separate concurrent batches should not usually use the same Arena<T>, unless you are happy that Reset() applies to both of them.

What if I keep hold of a sequence or reference?

If your code chooses to leak an Sequence<T> outside of a batch (more specifically: past a Reset() call, or past the arena’s final Dispose() call), then: that’s on you. What happens next is undefined, but commonly:

Basically: just don’t do it. Part of choosing to use an Arena<T> is making the determination that you know the lifetime of your data, and are therefore choosing not to do silly things. The risks here are mostly comparable to identical concerns when using ArrayPool<T>, so this is a perfectly reasonable and acceptable compromise.

How can I play with it?

It is available on nuget from 1.1.* onwards. Have fun!

Could I create something like List<T> on top of it?

Absolutely! It probably makes sense for any such type to be a class rather than a struct, though, since a lot of list access is done via interfaces, which usually involves boxing (since not many people write APIs that take things like <TList, ITtem> where TList : IList<TItem>, which is what you’d need for “constrained” access without boxing).

This page was generated by GitHub Pages.